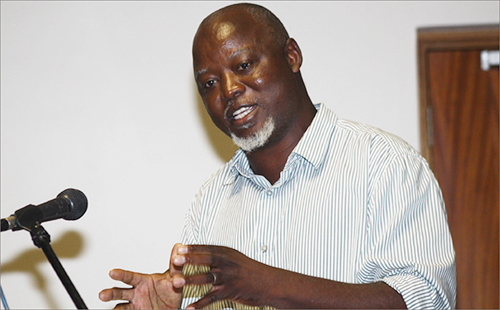 Political analysts have termed the nationwide protests by the Swapo Party Youth League (SPYL), the country’s largest trade union, the National Union of Namibian Workers (NUNW) and the Trade Union Congress of Namibia (Tucna) against Air Namibia’s liquidation as “too little, too late”.
The NUNW, which was joined by the SPYL, marched to the Swapo headquarters and Office of the Prime Minister, while Tucna petitioned parliament.

Speaking to New Era yesterday, political commentator and director of the Institute for Public Policy Research (IPPR) Graham Hopwood said he was not sure as to why some sections of the ruling party are now acting surprised about a decision that has been staring them in the face for some time while President Hage Geingob indicated in his State of the Nation Address (Sona) in 2020 that Air Namibia would most likely be liquidated. “The astronomical transfers of taxpayer’s money - almost N$10 billion in the last decade - was clear evidence that the airline could not pull itself out of the hole it was in. It is clear that more economic damage will be caused by keeping the airline open than by closing it,” Hopwood said. “Once the liquidation process is out of the way, the billions that were poured into Air Namibia can be spent on houses, healthcare and welfare benefits for the most vulnerable.” Political analyst Ndumba Kamwanyah shared the same sentiments, saying the issues of the airline come a long way where critical engagement was needed to demand accountability. “What they are doing is merely a reactive politics instead of proactive politics. Is the demonstration genuine or driven by politics to save the party›s face as it is being attacked from all corners is the question here,” he said. “I think the demonstration is justified but I think it is too little, too late.” Senior lecturer in the department of communication at the Namibia University of Science and Technology (Nust) Admire Mare said an amicable solution is urgently required that will safeguard livelihoods but also help the government to cut down on its budget support of the national airline. “It is not a simple issue but very complicated in the short to medium,” he said, adding the demonstrations suggest that the loss of employment that is likely to follow the liquidation of the airline requires honest and robust discussions between affiliate members of the ruling party. Last week, Cabinet approved the liquidation of Air Namibia. Making the announcement last week, finance minister Iipumbu Shiimi said: “This difficult decision was taken after careful consideration of the various options to save the national airline. All options assessed point to the fact that the national airline is not profitable and it has not been profitable since its inception. The net economic costs of Air Namibia’s operations far outstrip the net gains, and it is thus unsustainable.” Shiimi noted that at this stage, the country’s economy can no longer afford to perpetually provide financial support to Air Namibia at the expense of supporting economic growth and critical social services. The news of the country’s national flag carrier liquidation has for the past two days been heavily debated in the legislature with some parliamentarians saying parliament was not properly consulted even though many opposition MPs have been calling for the liquidation of the airline. When contacted for an update yesterday, public enterprises minister Leon Jooste said: “government will be communicating as a collective on the matter”.