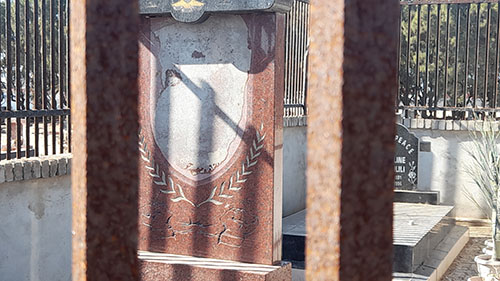 WALVIS BAY – Some Walvis Bay community members and family of the late liberation struggle stalwart Nathaniel Maxuilili called upon the government to relocate his remains to the Heroes Acre in Windhoek.

The freedom fighter died on 23 June 1999, in a head-on collision while being transported in an ambulance to the Rooikop Airport to be flown to Cape Town.

The visibly emotional family members yesterday morning at the Kuisebmond cemetery said they are making the request to the government due to the fact that their father’s tombstone has been vandalised on countless occasions.

The work of the vandals was clearly visible yesterday as pieces of his tombstone’s plaque were scattered all over the sand. Menethe Nendongo, said it is heartbreaking to see what has been done to Maxuilili’s grave by the same people that he fought to liberate.

“Therefore, I request the government to remove his remains and bury him where all the other heroes are,” Nendongo appealed.

Daniel Imbili also said it is a concern that graves are being vandalised at the town.

“The cemetery is so clean and beautiful, but it is sad to be greeted by vandalism when you visit your loved ones last resting place.

We know that this is just not a random act. Why would you pass all the other gravesites and choose a hero’s grave to defecate on and vandalise it? This is worrisome to me,” Imbili said.

Walvis Bay mayor Trevino Forbes echoed the same sentiments as the family, stating that Maxuilili deserves to be among all the other heroes. “It is perhaps not my place to say but my suggestion is that he is one of our national heroes and he belongs at Heroes Acre,” Forbes said.

Former Walvis Bay mayor King Mandume Muatunga said they would soon approach President Hage Geingob through the right channels to have Maxuilili’s remains relocated. “Maxuilili was at the forefront of the liberation struggle. He inspired a lot of Namibians as he was also instrumental in the return of Namibia to its rightful owners.

“Therefore, it is a shame that they are vandalising his tombstone, while knowing what his contribution was to the independence of the country and Walvis Bay as a town that was in the hands of the apartheid regime after independence,” Muatunga said.

Maxuilili was a member of Swapo, and a veteran of the struggle for the independence of the former South West Africa. Maxuilili served as a parliamentarian from 1990 until his death.