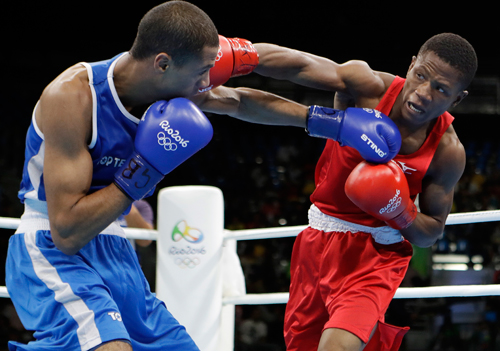 The Tokyo Olympics, which were initially scheduled to take place last year but had to be postponed due to the widespread Covid-19 pandemic, will now be held this year between 23 July and 8 August in Japan.

A total of 53 quota places were up for grabs for boxers at the World Olympic Qualifier which were slated for Paris in June, but the IOC’s Boxing Task Force - organising the Tokyo Olympics boxing tournament and the qualification events - scrapped the all-important qualifiers due to the coronavirus pandemic.

As an alternative to the cancellation of the qualifiers, the IOC will instead assign the fifty-three quota places to boxers based on their rankings, looking at the best-ranked boxer per region, per weight category receiving places at the multi-sport competition.
But Naule, however, is not entirely impressed with the IOC’s new arrangement, saying it is demoralising to boxers who were vying for qualification to this year’s Olympics. Naule says the new format makes it extremely hard for boxers to realise their dreams as most qualifying competitions were already cancelled last year due to Covid-19.

“It’s a bad thing that those qualifiers were called off, especially for those athletes who were pinning their hopes on the qualifiers in France but now they are cancelled. As a country, we were hoping to at least send three or four boxers to the Olympics but now with the recent cancellations, we can’t anymore. This is discouraging to our athletes who were eyeing to secure places at this event. It will also affect them mentally because all their hopes have been shattered. I don’t think athletes will have the patience to wait until the next Olympics,” said Naule.

He added: “For you to be ranked, you need to participate in competitions and our amateur boxers had limited action time during the past year due to Covid-19. I think this is a wake-up call for Namibia as a country to consider taking part in competitions frequently, not waiting until the last minute to compete in competitions. We need to take these competitions seriously and work on being pro-active. This will assist our boxers get better rankings.”

Sharing her views on this issue, Namibia National Olympic Committee (NNOC) secretary general Joan Smit said the decision was a tough one but said it was a decision that was beyond the IOC’s control.

“It’s not only Namibia but almost the whole world at large, the decision was a hard one I understand and will have an impact on our athletes who were wishing to take part in the competition. But I believe the time frame was short to compete in those qualifiers, you can’t qualify in few months before the games,” she added.
- mkambukwe@nepc.com.na