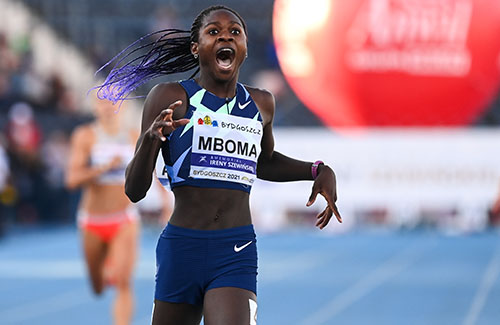 When Namibia’s Tokyo Olympics’ silver medallist Christine Mboma returns to action in the 200m event today in Birmingham, she will not be chasing fast times but will rather focus on getting her groove back, her coach has said.

The 19-year-old sprint sensation last made her competitive appearance at this year’s Kip Keino Classic in May in Kenya, where she pulled up injured during the women’s 100m race, and will today be hoping to make a strong comeback when she lines up for the 200m race at the ongoing Commonwealth Games.

Coach Henk Botha told New Era Sport that it is Mboma’s first Commonwealth Games, and she is coming from a very difficult injury.

“We don’t want to push her too hard because the aim here is not to run fast times, but to get her back slowly and safely. But she is ready to make her presence felt here at the Commonwealth Games. Ideally, it would have been nice had we had two or three events before coming to the games, But for now, the situation is as it is. We are ready and confident that she will do her best. Our plan is not to see big times, but we will see good enough times and her being competitive on the tracks,” Botha said.

Mboma will today square off against the likes of Wurrie Njadoe of The Gambia, Ella Connolly of Australia, Kenya’s Milicent Ndoro, Canada’s Zoe Sherar and Chloe David from the Vanuatu Islands as well as Sierra Leone’s Hafsatu Kamara in heat 1 of the ladies’ 200m event.

Prior to her Kip Keino Classic ordeal, Mboma recorded the third-fastest 200m time of 2022 with a 21.87 at the Gaborone International Meet in Botswana.

Meanwhile, Namibia’s campaign at the 2022 Commonwealth Games yesterday continued on a positive note when cyclist Alexander Miller won bronze in the men’s cross-country MTB final in a time of 1:36:20, finishing behind second-placed Ben Oliver (1:34:50) and eventual winner Samuel Gaze (1:34:19), who are both from New Zealand.

Also in yesterday’s action, boxers Jonas Junias Jonas and Tryagain Ndevelo’s run at the games was cut short after both fighters lost their respective quarterfinal bouts. Jonas was outpointed by Scotland’s Resse Lynch while Ndevelo lost to India’s Hussam Mohammed.

Para-sprinters Ananias Shikongo and Bradley Murere produced contrasting outcomes. Shikongo and his guide Even Tjiviju yesterday ran a time of 11.12 seconds to qualify for the men’s T11/T12 100m final, which will take place today.

Murere, who also competed at his first-ever Commonwealth Games, on the other hand, ran a decent time of 11.62 seconds in the men’s T45-T47 100m final, which proved insufficient to secure a place at the podium.

Sprinter Ivan Danny Geldenhuys yesterday ran a time of 46.51 to finish third and qualify for the semi-finals of the men’s 400m, which takes place tomorrow. Namibia’s other 400m sprinters, Andre Retief and Mahmad Bock, both ended fourth in their respective heats, and did not advance further in the competition.