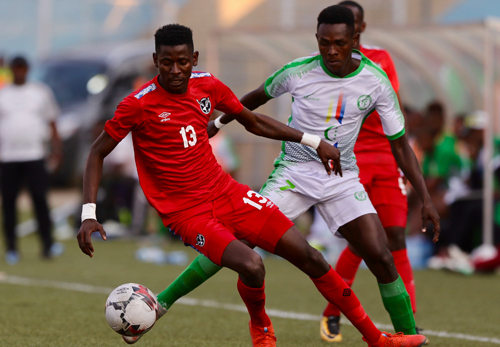 Namibia’s senior football side, the Brave Warriors, has dropped two places on the latest FIFA world rankings released yesterday, with Namibia slipping from 119 to 121 place on the global football governing body’s ratings radar.

With Namibia now ranked 121 worldwide, the latest rankings also mean that the Warriors dropped one place in Africa, sliding from 30 to 31.
The latest FIFA rankings follow hot on the heels of Namibia’s dismal performance at this year’s African Nations Championship (CHAN) held in Cameroon, where the Warriors got knocked out in the group stage of the tournament after suffering two consecutive defeats against Guinea and Tanzania before scraping a goalless draw against regional rivals Zambia in their last group outing.

Not only in the CHAN competition, but Namibia has also struggled in the ongoing 2022 Africa Cup of Nations (Afcon), where they have so far lost three and only won one of their qualifying matches. Namibia’s all-time highest ranking came in 1998 when they were ranked 68 in the world.
Belgium again topped yesterday’s rankings as the top ranked country in the world, followed by world champions France in second place and Brazil in third place. England and Portugal are placed fourth and fifth.

The FIFA world ranking procedures rely on adding/subtracting points won or lost for a game to/from the previous point totals rather than averaging game points over a given time period. The points, which are added or subtracted, are partially determined by the relative strength of the two opponents, including the logical expectation that teams higher in the ranking should fare better against teams lower in the ranking.
– mkambukwe@nepc.com.na