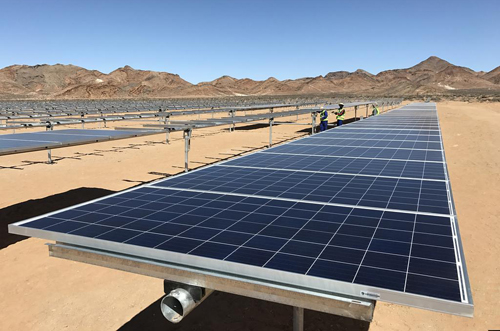 An infrastructure investment fund, managed by Old Mutual Investment Group Namibia, has acquired a majority stake in a 5MW solar PV photovoltaic plant at Rosh Pinah in the //Kharas region.

The fund has acquired a majority of the shares in Aloe Investments Number Twenty-Seven (Pty) Ltd, the project company that owns and operates the Rosh Pinah 5MW solar plant.
The acquisition forms part of a joint transaction with Sturdee Energy Namibia, which has acquired a minority stake in the plant.
Sturdee Energy is an African Independent Power Producer with a track record of developing, owning and operating 587MW of renewable energy projects.

The shares were previously owned by AEE Power Ventures SL, a Spanish energy company that developed and constructed the plant.
AEE Power has disposed of its full shareholding in the plant to the Old Mutual-managed fund and Sturdee Energy.
The general manager for AEE Power Ventures SL, Miguel Zaldivar, was pleased with the business transaction that leaves a majority share in the hands of Namibians, stating that “this will aid in transitioning Namibia’s energy supplies towards a greater share of supply from renewable sources”.

As part of the plan set out for the plant, shares will be majority-owned by Namibians, with 30% owned by a group of previously disadvantaged Namibians. The 5MW plant commenced commercial operations in 2017 and supplies power to NamPower under a long-term power purchase agreement as part of the Renewable Energy Feed-In Tariff (REFIT) programme.

Christoff Bauernschmitt, Head of Alternative Investments at Old Mutual Investment Group and his team of portfolio managers described the acquisition as a significant contributor towards the energy supply security in Namibia, saying: “We are pleased to be part of a project that creates sustainable impact in the country”.

He concluded with surety, stating that “Old Mutual will continue to make sustainable investments that will make Namibians the owners of critical infrastructure assets.”

Representing the consortium of previously disadvantaged Namibian shareholders in Aloe Investments, Panduleni Shaetonhodi welcomed the new shareholders to the project and commented: “We look forward to the benefit that the backing of an established institution such as Old Mutual, combined with the technical expertise of Sturdee Energy Namibia, will bring to realise the full potential of the project”.

Sturdee Energy’s executive directors Andrew Johnson and James White commented that they enjoyed working with Old Mutual’s Namibian infrastructure team on this co-investment in the Namibian energy industry: “Sturdee is excited to contribute our renewable energy project expertise to the Rosh Pinah project; this adds important operational capacity to our growing portfolio in Namibia.”