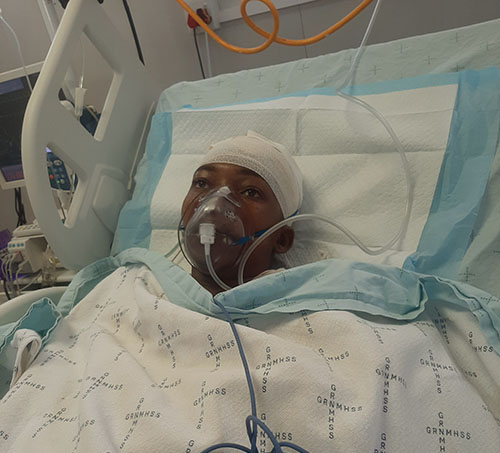 OSHAKATI – A 38-year-old woman, who is now battling for her life in the intensive care unit of Oshakati Intermediate Hospital, says she regrets not reporting the violence she suffered at the hands of her husband.

Selma Nakanduungile from Ondando-Oniipa village in the Oshikoto region suffered cuts to her head and back after she was allegedly gashed with a panga by her husband.

Her husband of six years and father of her three children, 44-year-old Joseph Iyambo, committed suicide moments after the final vicious attack.

“One of my neighbours has been telling me to report my situation to the woman and child protection division or at least to the ministry of gender but I didn’t. I was scared of what my husband could do once he learns that I have reported him. I am now regretting not taking that step.

“We never had peace in the house. We were always arguing and fighting. Even this time, we spent two weeks without talking to each other,” she said.

Recalling the incident that landed in the ICU and her husband ending his life, Nakanduungile narrated she and one of her sisters went to a birthday party in her village.

This infuriated him because she did not tell him when she left the house.

“The moment I arrived back from the party, my husband started arguing, threatening that he will teach me a lesson. He then took a panga and started to hack me in front of our children,” she said.

She screamed until the neighbours came to her rescue, but he fled and committed suicide by hanging himself on a tree near their house.

He was discovered moments later when the police followed his footprints.

Nakanduungile was rushed to the Onandjokwe hospital and eventually transferred to the Oshakati Intermediate Hospital.

Speaking from her hospital bed, Nakanduungile alleged she was often beaten and threatened that if she reported her husband, he would kill her.

She stated her husband constantly accused her of extramarital affairs and at times barred her from going out or talking to her male friends or relatives.

The couple got married in 2016 and they lived with their three minor children in Ondando village.

She advised other victims of domestic violence to stop hesitating on reporting abusive partners before it is too late.

“I am realising now that as women, we must not be ashamed of reporting abuse. We must speak up before it is too late,” she urged.

Shocked by the incident, the minister of Gender equality and Child Welfare Doreen Sioka said domestic violence should not fall on the shoulder of the victims but the people close by should also report trends of abuse when they spot them.

“Neighbours should also report the matter to the police, traditional leaders and our regional office. All domestic violence activities should be reported on time so that the victims get assisted before the situation gets worse,” she urged.

She added that people should work together in their communities to fight against domestic violence.

Also speaking to New Era, councillor of Oniipa constituency Tulipohamba Nuunyango said it is heart-breaking when parents fight in front of their children, especially the boys, as the vicious cycle of violence in society will never end.

“Committing suicide after someone has committed a crime is not a solution but a creation of problems in the family. Imagine your children experiencing these kinds of very devastating moments,” he said.

He urged couples to always seek assistance from social workers and church leaders.