Home / President tells media to focus on positive side 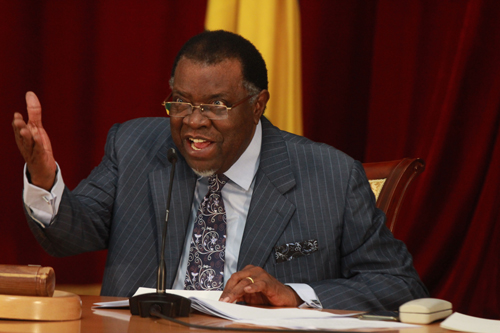 President Hage Geingob yesterday lashed out at the local media, saying journalists were more focusing on negative news than on positive developments realised in the country.

Geingob, who was speaking at the opening of the first Cabinet meeting of the year, specifically took issue with the way the media reported on the Afrobarometer report released recently in which Namibia and Cabo Verde emerged as the top two countries were citizens don’t have to pay a bribe to access public services.

The Afrobarometer survey released on 26 January this year reveals that out of 18 African countries surveyed, Namibia and Cabo Verde came out as the top two countries were citizens don’t have to bribe officials to access public services. In other sections of the report, where Afrobarometer asked the opinions of respondents, Geingob said the results were different due to the fact that the opinions are based on perceptions.  For example, he said, where respondents were asked ‘do you think corruption has increased?’, many responded to say ‘yes’.

However, he said, in this particular instance, respondents were asked whether they have paid a bribe to government personnel responsible for, among others, issuing identity documents.  “In terms of reporting corruption, let us take a cue from a local transport company, which recently reported attempts of bribery to the relevant authorities,” he said. “This is the level of vigilance required from all of us in order to deal with the scourge of corruption decisively. It is a welcome development because I have said many times, that citizens are often afraid to report corruption out of fear of losing their jobs and licences.”

Fishcor claims
Meanwhile, the Head of State reiterated his earlier position that he will at an opportune time address “insinuations” linking him to the state-owned National Fishing Corporation of Namibia (Fishcor) corruption scandal, “with the a view to demonstrating their falsity”.
“The case concerned has now reached a sensitive stage as the prosecutor general has taken a decision, and the case will soon proceed to trial. I will not seek to jeopardise or influence the administration of justice through public statements induced by the media,” he said.
“When trial-related rules and ethics allow and at an appropriate time, I will extensively address the unfortunate insinuations, conjecture and mischievous interpretations.”

The Fishcor corruption matter has resulted in the arrest of high-profile Namibians, including former fisheries minister Bernhard Esau and ex-justice minister Sacky Shanghala.

In April last year, Windhoek lawyer Marèn de Klerk, one of the alleged key figures in the ongoing corruption case, furnished the Anti-Corruption Commission (ACC) with a 477-page affidavit depicting the role he played in the multi-million-dollar fisheries bribery scheme. De Klerk’s law firm and his company Celax Investment Number One is alleged to have been used to funnel N$75 million from Fishcor to entities owned by the accused. In December last year, prosecutor general Martha Imalwa decided to arraign the accused before the High Court, with a pre-trial scheduled for 22 April this year. – ktjitemisa@nepc.com.na