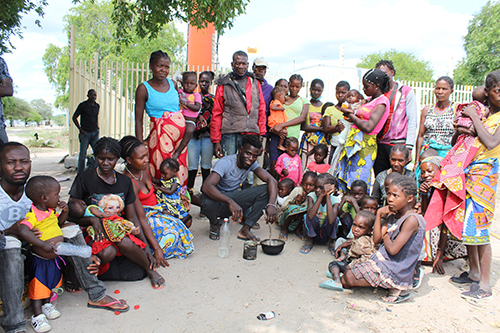 Barely three weeks after being repatriated to Angola by bus, destitute and homeless Angolan migrants – who camped at Etunda for almost a year – have walked back to Namibia to look for food.

About 70 migrants, who sleep under a tree near Helao Nafidi, say the situation back home is dire. The migrants made a U-turn through ungazetted entry points in Ohangwena.

At one stage, there were 3 000 migrants at the camp. Others have made it to as far as Windhoek to make a living. In the first week of January, 1 792 migrants were repatriated to Angola.

These include men, women and children, who have been living in Namibia for 11 months. During that time, 73 children were born in Namibia and 18 children under four died from malnutrition.

When New Era’ s team approached them on Wednesday, a crowd of about 30 people stormed the car, with some begging for food, while others thought they were being picked up for work.

Shinovanhu Sam from Ondjiva, in an interview with New Era, said it is better to sleep under the tree for two or three days with an empty stomach than die of hunger in their country.

“Our elders and small children died of hunger; their bodies are being thrown like flies in our country. We will keep coming to struggle in Namibia,” he explained as children were crying of starvation in the background.

He said the Angolan government promised to feed them if they return home, but it is not true.

“The situation in our country is now worse. For as long as I can walk, I will keep sneaking into Namibia,” he added. In January, the Angolan government said the migrants would be temporarily housed at a shelter in the Cunene province of Angola until they are dispatched to their respective homes. Some were seen standing in front of retail shops, waiting for someone who needs assistance with lifting or carrying items and pay them with maize meal or any token of appreciation.

Sao Jao said she and her seven-month-old baby as well as four siblings survive mainly from food and clothes they collect from the dumpsite.

The food items consist mainly of cut-offs they find in butcheries’ bins, which they mix with leftover maize meal that they also collect from bins.

“I have a family to take care of. We cannot sleep on an empty stomach. This is how we survive,” she said.

She says the situation forced her to go to the dumpsites to find food. Governor of Ohangwena Walde Ndevashiya told this reporter he is not aware the Angolans are back in Namibia. “All I know is that there will be a meeting in days to come to discuss the re-opening of Angola borders with government officials of Angola,” he explained.