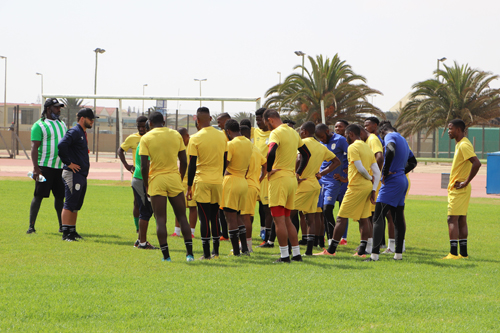 Local football commentators are in agreement that Brave Warriors coach Bobby Samaria has selected a relatively strong squad for the African Nations Championship (CHAN) tournament that kicks off in Cameroon this Sunday.
The Brave Warriors are in group D along with regional rivals Zambia, and Guinea and Tanzania.
Tigers captain Absalom Iimbondi, Marcel Papama of African Stars and stand-in captain Dynamo Fredericks are among the experienced campaigners selected for the CHAN competition.

Players such as Jonas Mateus, Erasmus Ikeinge, Johannes Mutanga and Deryl Goagoseb have been handed their first-ever national call-up by Samaria.
Former Namibia Premier League CEO Mathew Haikali believes Samaria has carefully selected the best players to represent the country.
“I believe the coach was cautious when he selected the crop of players in the squad. The team looks well balanced and I can say we have the best team,” said Haikali.

“There hasn’t been football locally, but it looks like whenever there is no football, everything goes well. Looking at the new players in the team, this would be an opportunity for them to expose their talent to football scouts that will be there watching. I believe the team is capable of making it to the next round.”

This will be the second time Namibia will be featuring at the continental showpiece, which is only reserved for locally based players. The last time Namibia participated in the competition was in 2017, which was staged in Morocco. At this competition, the Brave Warriors exited the competition in the quarter-finals after falling short to the host nation.

Also weighing in on the final team, renowned football expert Isack Hamata said the coach has better knowledge on the best players to select for such a tournament because he has been with the group for some time.
“The coach has been with these players for some time. For us to make judgement would be unfair, I believe he has been training with the crop of players since last year December, so he has fair knowledge on what he selected,” said Hamata.
“The team looks balanced. I think he also considered players that are mentally strong not only players who can perform well on the pitch but lack discipline. I want them to go out there and play for their nation.”