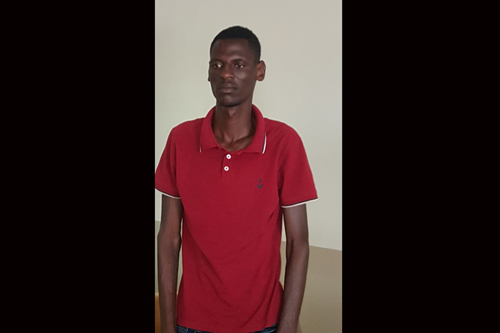 ONGWEDIVA - The man who stabbed to death his final year girlfriend for deleting his ex-girlfriend’s photos from his cell phone at Ongwediva was sentenced to 30-years imprisonment by the Oshakati High Court on Tuesday.

Paulus Nghifikepunye Nghipulenga was convicted of murder after stabbing his girlfriend 19 times with a knife.
The deceased Helao Hamuteta was a final year student at the University of Namibia’s Hifikepunye Pohamba campus in Ongwediva.
Nghipulenga told the court he travelled from Windhoek to visit his girlfriend at New Reception in Ongwediva on Valentine’s Day.
He spent two nights with her and on 17 February 2019 while they were in the kitchen, an argument broke out between them over SMSes and pictures the deceased saw in his cell phone.

The victim reportedly deleted the photos, slapped the suspect and threw away the phone, according to court information.
This led to the fatal stabbing.

In light of the testimony, Judge Johanna Salionga remarked that anger is a common occurrence and society expects its members to keep their emotions sufficiently in check to avoid harming others and those who seek solutions to problems through violence must be severely punished.
“In this instant matter, it cannot be refuted that the offence committed is serious, prevalent and the deceased died a cruel violent and brutal death,” said Salionga.

The judge further said that the court has considered that the deceased was a young woman who had her whole life ahead of her.
Recounting the evidence of the deceased’s fateful death, Salionga said every life according to the Namibian constitution is to be respected and protected and the accused failed to respect and protect the deceased’s life.

A cousin, who is only referred to as Henongo who testified in the matter, said the deceased’s death has left the family with a lot of questions.
Henongo told the court that as Christians, they have forgiven the accused, but they will not forget what happened to their cousin, sister and daughter. He said her cousin would have been a teacher upon completion.
Henongo told the court that as a family, they feel the convict has no respect for human life and should be taken away from society.
– nashipala@nepc.com.na