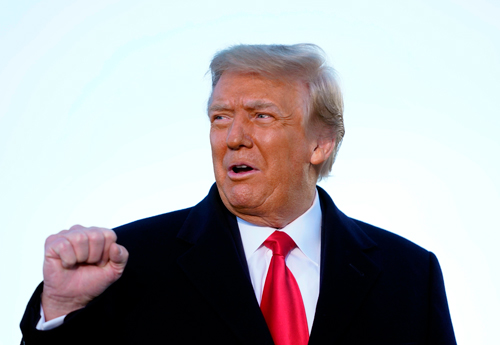 As the curtain came down on Donald Trump’s tumultuous presidency yesterday, local commentators agreed that Africa, in particular Namibia, can look forward to better relations with the United States under new leader Joe Biden. Biden was yesterday sworn-in as the 46th president of the US.

Biden and vice-president-elect Kamala Harris have identified Africa as a major player in international affairs and the advancement of multilateralism.

One of the country’s foremost diplomats Tuliameni Kalomoh yesterday told New Era the US presidential transition will herald a dramatic change in tone and style given Biden and Trump’s diametrically different personalities and different worldviews.

“Biden will likely be more respectful towards the African continent and the African people, considering he won both the primaries and national presidential election in no small measure because of the African/Americans and other minority voters,” Kalomoh said.
“Trump was condescending and totally disdainful towards Africa and the African people. He called the continent and its people pejorative and derogatory names. His attitudes towards Africans border on racism. I doubt there are any sane African leaders and people who will miss Mr. Trump.

I for one will certainly not.” Kalomoh, who at one point served as assistant to the late United Nations secretary general Kofi Annan, was, however, quick to add the continent will have to balance its expectations of the Biden administration with the prevailing realities. “The new administration, like the outgoing one will continue to pay some attention to the security issues in Somalia and broader Horn of African; Central African Republic; the Sahel region and the Lake Chad Basin countries to support the different countries in their respective fight against the scourge of terrorism and extremists,” he said. Also, he said, it should be noted that foreign policy, including African issues, received only scant, if any, attention by either Biden or Trump during the election campaign. “The Covid-19 pandemic has so ravaged the economy of the US that I don’t see the US being able to provide economic assistance to Africa,” he added. Additionally, Kalomoh believes Biden will renew the African Growth and Opportunity Act (AGOA) and continue to support Namibia through the President’s Emergency Plan for AIDS Relief (Pepfar).

Another veteran diplomat Kaire Mbuende said the Biden administration could return to an era where Africa will enjoy greater attention in US foreign policy and development cooperation. “Biden administration commitment to multilateralism is a welcome development as Africa will engage the US in multilateral fora on a number of issues such as trade and development, reform of WTO (World Trade Organisation) and climate change,” he said. “As you may know, the Trump administration withdrew from the Paris Agreement. The excitement about the change of guard in Washington and the need to engage the US on the side of some Africa’s strategic partners such as the EU may divert their attention from Africa and prioritise their engagement with the US. Africa will not miss the Trump administration.”
ktjitemisa@nepc.com.na