Home / Get out of comfort zone, ministers told… Geingob says failure is not an option 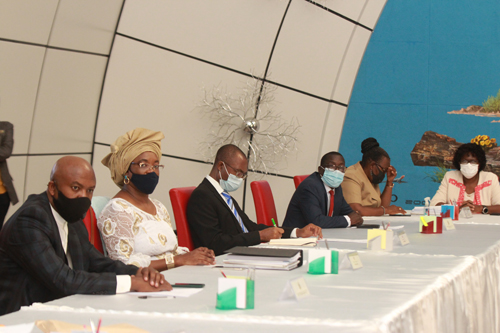 President Hage Geingob has called on members of his Cabinet to get out of their “comfort zone” and avail themselves to meet with community leaders, ordinary citizens, media and the business fraternity.

Geingob said this while officiating at the opening of the first Cabinet meeting of the year at State House yesterday.
“As the constitutional body responsible for the determination of policy, and for directing, coordinating and supervising the activities of various offices, ministries and agencies, we have a huge task ahead of us,” Geingob said, warning if Cabinet members do not adopt a progressive approach to executing their duties, then they will not overcome prevailing challenges.

The President further told his Cabinet colleagues that citizens were looking to them for leadership and should be able to articulate effective and implementable strategies to get Namibia back on course.

“The path towards recovery is a collective effort,” he added. Therefore, he said the prime minister, deputy prime minister and Cabinet ministers should regularly engage with traditional authorities, faith-based organisations, large and small businesses, academia, the media and the youth, amongst others, to engage in constructive discourse to identify effective solutions to implementing projects and programmes.  “This should be an ongoing process, because as we address existing issues, new problems may arise.

The Year of Resilience must be defined by a collective approach to nation building and the challenges we face,” said the head of state.
“The channels of communication between government and the people must be enhanced so that every citizen can participate in shaping the policies that affect his or her life.” As President, Geingob said has made it explicitly clear that he views the public’s trust as sacrosanct.
“Leading the people of this great nation is the ultimate privilege. My ultimate priority and commitment is to advance the interests of all Namibians,” he said.

“All of you present here today must share the same sentiment and remain committed to ensuring that our processes, systems and institutions are characterised by greater transparency and accountability.” Speaking of the Covid-19 pandemic, which has claimed over 350 lives and disrupted economic activity, the head of state reminded ministers that many Namibians faced untold loss and made tremendous sacrifices.
“We cannot ask others to make sacrifices without making sacrifices ourselves. It is therefore crucial that as a government, we continue to spend wisely and cut costs, wherever possible,” he said.

Furthermore, Geingob said, delivery and execution is the key and ministers should not delay implementation of crucial projects through “procrastination and indecision”.

“I am aware that the aversion towards taking decisive action on the implementation of projects could stem from the fear of being perceived as corrupt, but I have always said that if one is not corrupt, then you have nothing to hide or fear,” he said.
“Do your job with clear conscience and to the best of your ability. I have stated on several occasions that I believe that corruption is not systemic in Namibia, but perceptions have been created that Namibia is a corrupt society,” he added.

Tainted image
Meanwhile, the President said although corruption is not systemic in Namibia, government recognises that some corrupt officials have tainted the name of our country.

“It is therefore important for all citizens to emphasise that corruption in any form, e.g. kickbacks, or percentage commission for the amount of a contract, is unacceptable,” he added.
He said corruption and perceptions thereof erode public trust in institutions. “We should therefore intensify the fight against corruption in order to ensure that each and every cent earmarked for development reaches the intended beneficiaries,” he said. – ktjitemisa@nepc.com.na