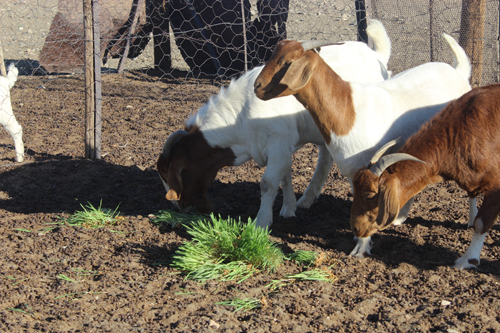 Namibian farmers are slowly embracing hydroponics production as a means to an end against frequent dry and arid conditions of drought that the country is accustomed to, which places a tremendous strain on grazing pastures.

Hydroponics involves supplying cereal grain with necessary moisture and nutrients to enable germination and plant growth in the absence of a solid growing medium. The resulting green shoots and root mat are harvested and fed to livestock. The system has great advantages during drought situations, as it requires minimal water and has a very short growth period (seven days until harvest).
The Food and Agriculture Organisation (FAO) of the UN is amongst those that have led efforts to roll out hydroponics to various parts of the country.

Tjiho said the direct beneficiaries who received training in hydroponic fodder production are in a position to produce from the structures for themselves. They also received basic training on animal health, including the administration of veterinary medicine as well as training on correct feeding of the livestock.

All the beneficiaries’ livestock were vaccinated against various important diseases (Cattle – Anthrax, Botulism & Black Quarter; Small stock – Pulpy Kidney) and treated for both internal and external parasites, including having received multivitamin metabolic injections to boost their immune systems and overall health status,» he said.

The project, according to Tjiho, made a deliberate effort to reach women-headed households who own livestock and managed to assist a considerably high proportion – about 40% - of the total assisted households.
The hydroponics production training is part of FAO›s “Emergency livelihood support to drought-affected communities in Namibia”, which was initiated in January 2020 to assist government in its efforts to meet humanitarian needs brought forth by the prolonged drought situation in the country.

Going forward, Tjiho said the project aimed to ensure that whatever livestock of the farmers survive and are in a good enough condition to not only be used for other household needs but can also reproduce to replace the animals lost due to drought.
Hopefully, the project has shed some light on the potential of hydroponic fodder production and will, thus, also trigger the production of barley seeds in the green scheme to ensure supply is adequate, as currently, the bulk of the barley seeds was supplied from South Africa.
The investigation into the use of all other locally produced grains such as maize, mahangu and sorghum is ongoing and provides an even cheaper/readily available input,» he said.

across the world as a great tool that farmers can use to provide supplementary feed to their livestock in times of drought when grazing is scarce.
The system requires only seed and water as production inputs with modest labour inputs while having minimal post-harvest losses, with no fuel required for harvesting and post-harvesting processes.
Moreover, in hydroponic systems, fodder is produced faster, taking only seven to eight days to develop from seed to fodder, while it takes 45-60 days under traditional systems.
- tjatindi@gmail.com