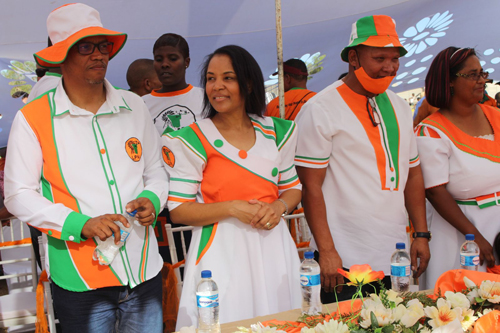 The Landless People’s Movement (LPM) has rejected claims that it is predominantly a party of the south, describing such perception as unfounded, ‘frivolous’ and without factual basis.

“We are a party for all Namibians. Anyone that has been following us for the past four years knows what issues we have advanced. Anyone that has listened to parliamentary debates knows the issues we have advanced,” said LPM operative secretary Edson Isaaks.
Isaaks said the party has managed to win seats on local authorities throughout the country such as in Okakarara, Khorixas, Walvis Bay, Swakopmund and in the capital, Windhoek.

“We have demonstrated that we are a party for all Namibians regardless of race, sex, origin,” said the soft-spoken Isaaks whose position is equivalent to that of secretary general.

LPM made history when it won seven out of eight seats on the Hardap Regional Council as well as winning control of most local authorities in the //Kharas region.
Hardap was previously dominated by the ruling Swapo that could only manage to retain Rehoboth Urban East constituency.
Isaaks, who is also a member of parliament, said his party’s success is attributed to the relentless pursuit of justice, equity and truth by the movement.

“We have also worked hard to groom youthful leaders in the movement that were able to galvanize the electorate,” he said.
“For example, the chairperson of the management committee of the Keetmanshoop municipality Easter Isaak is a youthful leader who has been groomed and now serves the community in a key position in the council,” he explained, adding that the party’s performance is the cumulative effort of four years of diligent work.

He also shot down claims that he was ‘wheelbarrowed’ into the position because of his long-term friendship with party leader leader Bernadus Swartbooi.

“I was never wheelbarrowed into any position. We have campaigned and fought for the poor, landless and destitute Namibians, even when we as a movement didn’t have any finances. We have worked extremely hard to build this organization on a solid foundation of integrity and tenacity,” said Isaaks who is a former teacher.

He said he made a humble contribution to the birth, growth and formation of the party.
“During the initial phase we worked extremely hard to build a strong support base. I was instrumental in organizing community engagements. We furthermore had consultative meetings, called smart talks, where we invited land experts, lawyers and various academics to discuss the burning land question, with a view to influence public policy,” he said.
– ktjitemisa@nepc.com.na